BATMAN (MDIS Business School)
Even with so many degrees under his (utility) belt, Bruce Wayne was always best known for his astute business sense: and for good reason, since he has a billion dollar empire to look after. To follow the footsteps of the dark knight, taking up a business course might just be what you need.

IRON MAN (School of Engineering)
Completing his studies in electrical engineering, Tony Stark has always had a passion for gadgets. If, like him, you enjoy wrapping your head around the nuts and bolts of all kinds of gizmos, engineering could be right up your alley.

SPIDERMAN (School of Fashion & Design)
Peter Parker was never without his notebook and a pencil, and in the superhero universe he was said to be the most creative of the bunch. If, like Peter, you’re looking for an outlet for all that pent up creative energy, then a design course could just be what you need to scratch that itch.

THE INCREDIBLE HULK (School of Health & Life Sciences)
Constantly looking for an antidote to reverse the gamma ray damage he’s inflicted upon himself, Bruce Banner is a trained biochemist, which means he understands what makes the body tick. If you’re fascinated by the mechanics of the human body like him, life sciences could be your calling.

SUPERMAN (School of Media & Communications)
Even after studying a myriad of courses in university, Clark Kent knew he wanted to be a journalist: and so, he did, eventually ending up as the lead reporter and a newscaster at the Daily Planet. If you’re looking to exhibit a similar skill set, then mass communications is the way to go.

PROFESSOR X (School of Psychology)
Born with telepathic powers, Charles Xavier used his powers to not just fight the bad guys, but to get inside their heads as well. If you’re looking to do just that, a psychology degree may be the first stop to unlocking the secrets of the mind.

WONDER WOMAN (School of Tourism & Hospitality)
If, like Wonder Woman, you are never short of a smile and can always spare a minute to help people, taking up a hospitality related course could help you with that. Wonder Woman also spends most of her time travelling across various universes. So if you’ve got the travelling bug, then studying tourism would be the perfect fit. 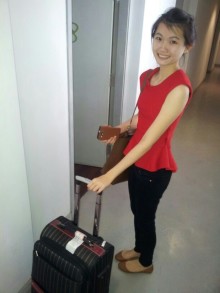 MDIS Experience Grand Prize Winner Febryna Soetedja embarked on a journey to discover not only MDIS, but also the little red dot known as Singapore. It was a journey she most definitely will remember for a long time! Febryna’s personal guide, Jannah Shah, recounts the adventure they shared on their four-day trip together.