When Miss Elaine Tang received her A level grades five years ago, she was unsure of her prospects.

She decided to consider to further her studies at Management Development Institute of Singapore (MDIS).

After being given a tour of the MDIS campus by the staff, she knew MDIS was the place for her to be in and felt it was not second-best to a local university.

Miss Tang, who was from Jurong Junior College, said MDIS provided a conducive environment and the science laboratories were well-equipped.

She went on to pursue a degree course in biomedical sciences in MDIS as she is interested in science and wanted to work in the healthcare industry.

Although she had not studied biology for her O or A levels, MDIS provided her with a six-month foundation course in which she studied biology, anatomy, and physiology,among other subjects.

She said: “The foundation course is a good thing about MDIS, as it allowed me to strengthen my foundation in science.”

In November 2011, Miss Tang graduated from MDIS with a Bachelor of Science (Hons) in Biomedical Sciences awarded by the University of Bradford, UK. Now, she is living her dream, working as a research coordinator at the Singapore Eye Research Institute.

In her job, Miss Tang interacts with patients, does eye tests for them and provide other kinds of patient care daily.

She said: “I have no regrets about doing my degree in MDIS. In fact, I consider myself to havemade a wise decision.

“MDIS is one of the top private education institutions in Singapore. It is recognised and trusted.

“The staff at MDIS are very friendly, and there is also a Student Services Unit where you can ask any course-related questions.

“The lecturers are very approachable too. This makes it easy for students to ask them questions and it facilitates our learning too.”

As many of the lecturers in MDIS are industry practitioners themselves, Miss Tang felt that students benefited from the sharing of their work experiences.

She said: “The stories that they shared provided us with a different perspective to the lessons taught ascompared to the lecture notes.”

Miss Tang also enjoyed the campus culture in MDIS. She said: “I met many students from different countries. Initially, I thought I wouldn’t be able to click with them but they were really friendly and they also taught mea lot about their culture and languages.”

Miss Tang also said that school hours were flexible and allowed students time for self-study and other school activities.

She added that MDIS was a fun place to be too as funfairs and bazaars were organised from time to time. She said: “The school also conducts workshops for our enrichment. There are also recreational facilities and co-curricular activities we can take part in.”

Besides applying the relevant skills and knowledge from her course at her work place, Miss Tang has also benefited from the many individual presentations that she had to do at MDIS.

Miss Tang advises all A-level graduates: “If MDIS offers the course you want, then study there. The school offers another option to a direct honours degree and it takes three years to complete.

“Quality is not compromised and MDIS’ courses have the same level of intensity as those at any other university.” 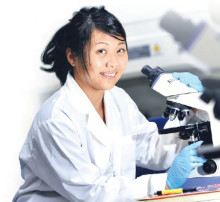 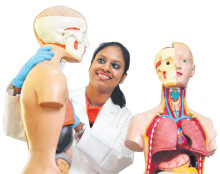 On track for a research career

She loves studying biology. As early as when she was in secondary school, 25-year-old Elaiyarani Subramaniam found she had a real passion and interest in the subject. 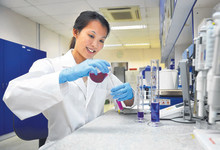 Miss Wong, 24, had always wanted a career in the life sciences, as she liked biology in school. 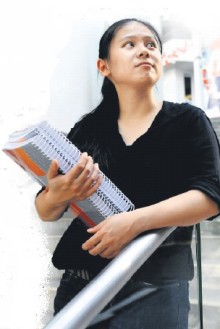 Since childhood, Ms Huang Hui Lin, 24, has always been passionate about the life sciences, particularly in the area of animal sciences. But that was only the beginning... 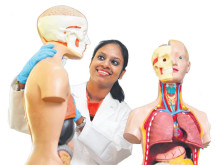 On track for a research c...

She loves studying biology. As early as when she was in secondary school, 25-year-old Elaiyarani Subramaniam found she had a real passio... 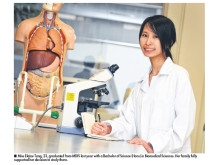 As good as any university

Miss Elaine Tang, who was from Junior College, graduated from MDIS with a Bachelor of Science (Hons) in Biomedical Sciences. She explains...